Sundance, Butch, and Me Book 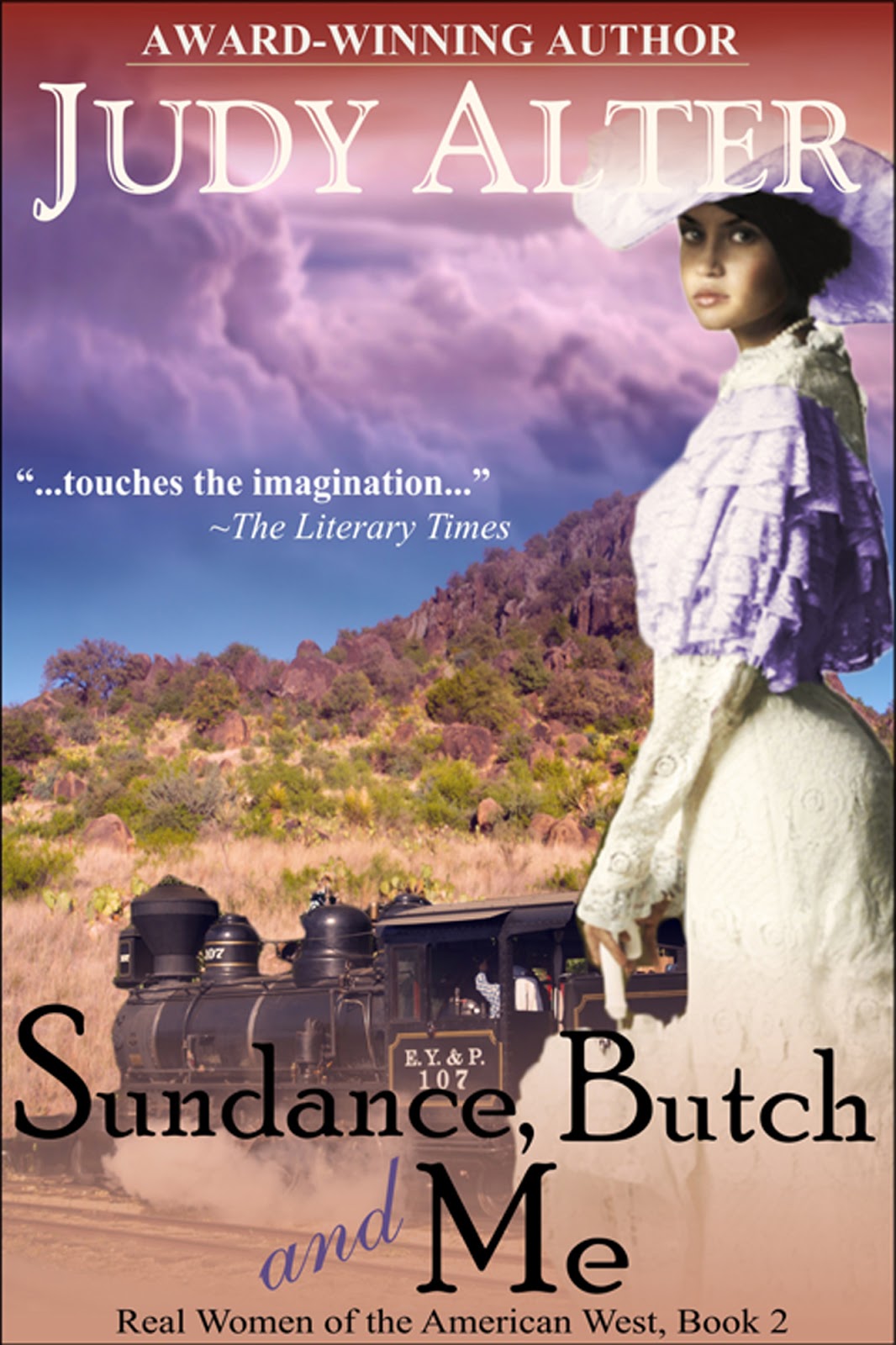 Anyone have any need for a “never before used” set of notes for a talk on Butch Cassidy and the Sundance Kid, as seen from Etta Place’s point of view? I just happen to have such. My calendar said I was to speak on my book by that title next Wednesday, but I had heard nothing and couldn’t reach the contact name I had. This had all been arranged a year or so ago when I was less confident of my health than I am now. Turns out the group sensed this lack of confidence and scheduled someone else.

I am never one to be unprepared, so while I was in limbo about this, I roughed out some notes. And remembered how much fun I had writing that book and telling that story. Yes, the Hole in the Wall gang story has been told many times, but I was then writing several fictional biographies (I may just have invented a genre) of women prominent in the nineteenth-century American West, and I saw a chance to tell the outlaw story from the female point of view. I confess that as I wrote I constantly saw Robert Redford and Paul Newman in my mind. Who doesn’t know and love that movie?

Etta Place was and remains a mystery character. No one knows where she came from—she just appeared at Fannie Porter’s house of pleasure in San Antonio. Even there history is murky—I choose to believe the story that she was never one of the “working girls” but was Fannie’s protégé. And even historians of the West are not quite sure what happened to her. Did she die of appendicitis in Denver, after the South American shootout that supposedly killed Butch and Sundance? Or did she, as local legend has it, come to Fort Worth as Eunice Parker and run a respectable boardinghouse? The wonder of writing fiction is that I got to choose from those possibilities.

But history tells us about Etta’s life between San Antonio and Fort Worth. She rode with the gang, she held the horses in train hold-ups, she robbed banks and endured grueling getaway rides. After endless research, I could, twenty years ago, have told you where Etta, Butch, and Sundance were at any time, the hideouts they used—Hole in the Wall in Montana and Robber’s Roost in Utah—and when they visited Fort Worth, which they did several times.

Some of the stories are hilarious—this is the only one of my books that moved one son-in-law to outright laughter. There’s the time Etta wanted to go back to get a ring she saw on a bank customer—Sundance told her firmly “no.” And there was the bank robbery where patrons in the bar across the street were alerted by seeing bank customers with their hands raised in the air. Or the outlaw who was captured hiding in an outhouse—the gang eventually had to break him out of jail.

Butch Cassidy was somewhat of a Robin Hood figure. There’s the time he robbed a banker who had just taken a widow’s savings to pay the mortgage. Butch turned right around and rode back to give the money to the widow. But I hold no candle for the gang—they were outlaws for the thrill of it, Etta included. Somehow, in American, we often make heroes of our outlaws.

Note the title: Butch’s name is between Sundance and Etta. That’s in recognition of what I saw as a clear bond between Butch and Etta. Sundance was self-centered, his affair with Etta purely one of passion; there was genuine love between her and Butch. At least, that’s my interpretation.

The book is a companion to three other titles about women in the American West: Libby (Elizabeth Bacon Custer), Jessie (Jessie Benton Frémont), and Cherokee Rose (based on the life of Wild West cowgirl Lucille Mulhall). Join me for a trip back to the days of the Wild West—fascinating time and place.