A Magnificent Accomplishment for TCU Press 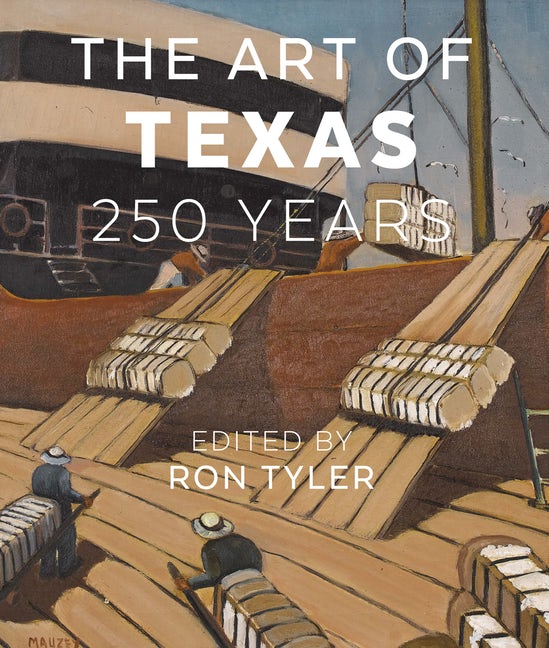 I went to a reception last night, book launch if you will—for a simply magnificent book from TCU Press. It’s The Art of Texas: 250 Years, Ron Tyler as editor and contributions from well-known scholars, art historians, and curators. At 456 pp, measuring 10 x 12, and weighing 7 lbs., it’s a big baby. Kudos to TCU Press production manager Melinda Esco and to Vicki Whistler, who designed the book. No detail is overlooked, nothing spared—the color reproductions, on coated paper, seem to shimmer.

It’s the kind of book that I always wanted TCU Press to do during my days as director, the kind that establishes the press as a serious contender in the world of academic publishing. University presses were for years—and maybe still are—an endangered species. Certainly during my tenure as director I faced more than one dire administrative threat to close the press in order to get its budget, which was miniscule in the face of the university’s overall budget. The provost simply didn’t see the value of a press, and we constantly tried to produce worthy scholarly books that would prove our worth and convince him that academic presses were not money-making ventures. They exist to contribute to the existing body of knowledge and to bring prestige to their institutions. With this art history, the first to take a serious and in-depth look at the broad sweep of Texas art, TCU Press has achieved this.

While I enjoyed support for the press from several administrators and from Dea of the Library June Koelker, I always felt we were on thin ice. That has apparently changed, and Director Dr. Dan Williams has broad support from the administration. I congratulate him and wish him well.

TCU Press has done other, notable books in recent years—memoirs from the late Lonn Taylor, a recollection by Fort Worth TV personality Bobby Wygant, serious yet informative and interesting studies of Texas politics—thank you, Jim Riddlesperger. The press has been a strong influence in maintaining the strength of Texas fiction, publishing new works by Texas authors Jan Reid and Tom Zigal as well as rescuing from oblivion significant out-of-print titles by William Owens, Jane Gilmore Rushing, Dan Jenkins, and almost the entire canon of Elmer Kelton’s fiction. In my day, Kelton’s books were the backbone of the press’ list.

For me, retired some nine years now, it’s been like sending a child off into the world and watching its success. When I retired, one of my colleagues said, “Don’t worry. We’ll take good care of your baby,” and that’s about how I felt about it. My congratulations to everyone connected with this project—and a challenge: now that you’ve made your mark in Texas fiction and art, what’s next? Women’s studies?

The book launch party had another side for me, a chance to visit with people I once saw often and now see rarely. I caught up with a history professor who served on the press board, with an old friend from the Star-Telegram, with June Koelker, and with the editor’s wife, who I think I’ve known forever. And I am always glad to see Melinda Esco, who was both colleague and friend and remains my dear friend.

Afterward Carol and I went to Lucille’s for a quick supper, and I had another treat—crab fingers! A nice day.